The Seas at TGOT Music Festival 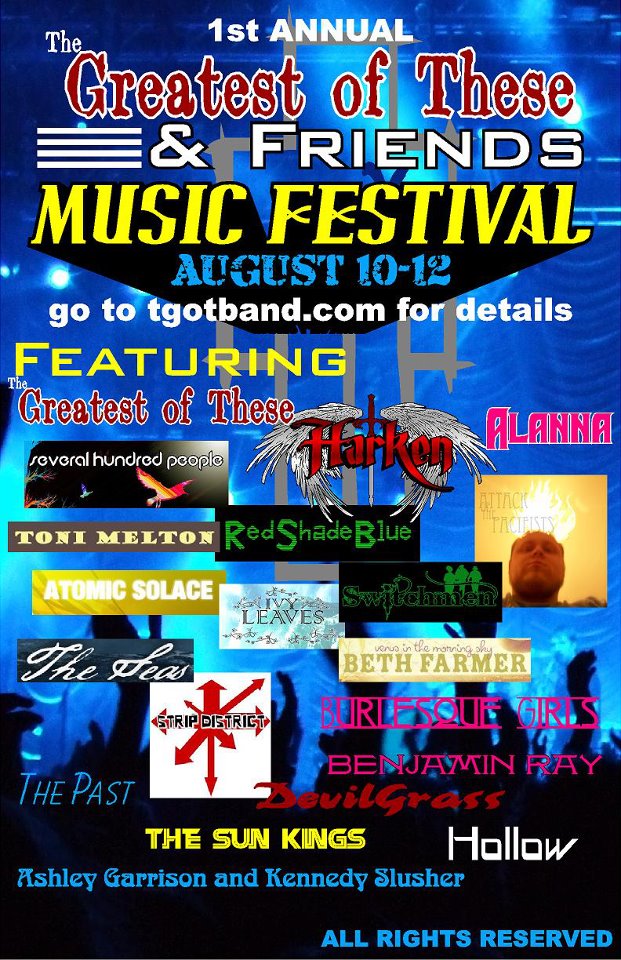 Passes for the entire weekend will only cost you $15 each! This includes primitive camping & parking for the weekend, and a TON of good Rock n’ Roll, Folk, and Americana music! In addition, we will also be featuring the Rebel Riot Revue Burlesque Troupe!  You are welcome to bring your own (it’s BYOB). The festival is located 3 miles down Old Richmond Road on Trent’s (from The Greatest of These) family’s 11 acre farm. It’s off of White’s Lane. There’s a country store 1/2 mile from farm (they sell beer).

You can get tickets at the discounted rate of $10 here:
http://www.tgotband.com/EarlyFestivalFriends

You can learn more about the TGOT Festival here:
http://www.tgotband.com/tgotandfriendsfestival
(tickets purchased from this page are at full price – $15.00)

END_OF_DOCUMENT_TOKEN_TO_BE_REPLACED

The Seas open for Trivium!!!

We’ve had kind of a whirlwind week! We got picked, thanks to our awesome fans, to open for Trivium at Buster’s in Lexington!!! We’ve always wanted to play at Buster’s, but we never dreamed it would be opening for a NATIONAL ACT!!! The whole experience, from soundcheck to the actual performance, was awesome! Our set was short and sweet! The songs represented a good sampling of our sound…Human Condition, The Great Wave, A Separation and Across the Earth! We had a wonderful time and can’t wait to do it again!!!

Fabryka Industrial Rock Magazine recently reviewed our debut album, A Separation, and gave it 4/4 stars!  We have posted a portion of the review below, but you can read the full review here.

It’s quite difficult to stay neutral when a concept album in the vein of A Separation is wrapped up with such a huge emotional charge. It comes like the attraction of a first love – it opens up, steals one’s soul completely, then it leaves the fragile human dry, crying for more…

We played a tight, concise set at the Attic Friday night and, in my opinion,  destroyed it! Even though we went on a little later than expected, the show felt good from the get-go! Very Cool crowd! Everything went very smoothly and sounded good on stage, which makes it a little easier! We premiered our version of “My Sharona” at this show, and I think it was a success. If you’ve not heard the version, you may be thinking, “My Sharona???” Lucky for you, we recorded it!

It feels great to come off of a good show playing for some cool people.

Just got home from a killer rehearsal. We did a run-through of the setlist for the Attic show on April 27 and man, we DESTROYED it! Very precise. Feels good to see the hard work  paying off!!! Hopefully you guys can check us out at the Attic next Friday…Hopefully we can pull off the set as good as we did tonight!!! hahaha

We have a lot of exciting things happening in the near future!

First of all, we’ve spent the last few weeks listening to the first mix of our new track “Across the Earth.” We all agree that it sounds MASSIVE! We’ve made a few production notes and sent them back to Cecil and Ian at Groove Studio. Just a few tweaks and it will be ready. I hope you all are ready…

We’ve also been hard at work in the rehearsal room writing new music. We’ve got some passages of music that are truly magic. The easy part is coming up with new riffs… the hard part is buckling down and arranging these riffs into songs, which is pretty much where we are now. I expect 2 to 3 songs to come from this current batch of sounds we’re working with.

We have a show coming up at the Attic in Lexington on April 27. We will be performing with Lucid Grey and Somatic, so it’s sure to be a great show all around! We have a new setlist made for this show, and it’s going to feature our new cover of “My Sharona.” Forget everything that you know about this song… it is truly a brand new monster. You’ll see…

And finally…we have some cool festival news for late summer.

In August, we will be performing at a mini-music festival in Lexington hosted by The Greatest of These!  I will post more details on this as they become available, but it’s shaping up to be a great show!

We have also been selected to play the Jubilo Music and Art Festival  taking place on September 13 – 16 at Fort Boonesborough, KY! This festival is going to feature the best regional musicians as well as high-profile national acts, so it will be great for the music  scene of Kentucky. To make sure this festival gets off the ground running, Jubilo has set up a Kickstarter page and are accepting pledges. To learn more about the festival and to keep track of all the performers, visit their kickstarter page at http://www.kickstarter.com/projects/576128168/jubilo-music-and-arts-festival